“We can build United States of Africa”, al-Qathafi says 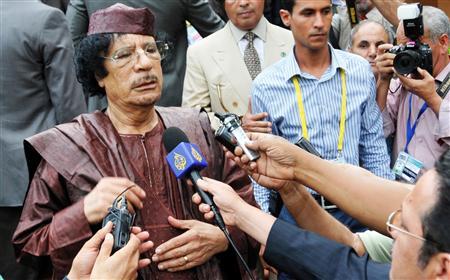 Libyan leader Muammar al-Qathafi addresses the media as he leaves the venue of the African Union (AU) Summit in Uganda’s capital Kampala 27 July 2010.

(Reuters) – Libyan leader Muammar al-Qathafi said on Tuesday his dream of a United States of Africa was still alive and this week’s African Union summit was another step toward that objective.al-Qathafi has been pushing for an African unity government for years, saying it is the only way Africa can develop without Western interference, but many African states say the idea is impractical and would encroach on their sovereignty.

Like previous African summits, this week’s gathering in the Ugandan capital Kampala discussed steps toward creating an African government, but the issue was overshadowed by chaos in Somalia and an international arrest warrant for Sudan’s president.

“I am satisfied that Africa is going along its historic and right road,”

al-Qathafi told a small group of reporters in Kampala at the end of the summit.

“One day it will become similar to the United States of America.””We are approaching the formation of the African Authority, and each time we solve African problems and also move in the direction of peace and unity. We deal with problems step by step. We are continuing to do that,”

al-Qathafi said.al-Qathafi held the African Union’s rotating chairmanship last year, and he used it to push for the organization’s small executive body to be granted enhanced powers and remodeled as the African Authority.

Asked about that proposal on Tuesday, al-Qathafi said:

“Studies are still continuing and it is not finished yet. Experts and the people responsible are still studying the documents. They might be completed at the next summit or after.”

Some African leaders say they cannot be expected to cede sovereignty to any African bloc just decades after they wrested it away from their colonial rulers.But al-Qathafi‘s idea has had a sympathetic response in some states, helped by his reputation in parts of the continent as a champion of the developed world and also by the millions of dollars in aid his oil-exporting country spends in Africa.

Commissioned by the Organisation for Development and Administration Centres (ODAC) and the Libyan Company for Planning and Urban Development (LCPUD), this development is the first of its type in the Middle East and North Africa.

ECA said in a press release that they are collaborating with local practices, Libyan Engineering Office (LEO) and Al Mada.

Shahat Garden City – Madinat Hadaek Shahat – is located in the renowned Green Mountain region in eastern Libya, only a few kilometres south of the UNESCO World Heritage Site of the ancient city of Cyrene.

Emphasising the connection to the existing town of Shahat with carefully planned road links, the new, mixed-use development will create homes for 60,000 people over the 1500-hectare site.

Dense neighbourhood centres have been achieved through an abundance of mixed use and adaptable buildings that will allow for growth and change according to commercial and social pressures, with new civic buildings, schools, a university and a central botanical garden.

Rural smallholdings and wadi farms that help to integrate the farming culture of the local community surround these hilltop centres.

Surrounded by desert, the 270-mile (432 kilometres) stretch of coastline is an oasis for the country with a moist and cool climate, similar to parts of Italy and Southern France and unique within Libya.

During the summer, the region experiences a considerable diurnal shift between daytime and nighttime temperatures due to the elevation, continuous wind and proximity to the Mediterranean Sea, while during the winter months there is a proven need for homes to be insulated.

The terrain is green with good agricultural land in the wadis and abundant scrub in more exposed areas, with areas of low trees hosting abundant and unique plant and animal life, as well as concealing many archaeological secrets yet to be discovered in their entirety. The project aims to set new standards for building design and public space in Libya without compromising on privacy and cultural imperatives.

Closely following the criteria of the Cyrene Declaration – the Libyan Government’s 2007 vision for a sustainable future in the region – the Shahat Garden City masterplan has been formed from a deeper understanding of what is already there.

On the one hand the site is incredibly rich in important archaeology and unique biodiversity, yet it also consists of fragile agriculture, complex topography, modern infrastructure and a diversifying economy.

Edward Cullinan Architects have developed expert knowledge of the Green Mountain region, and it is due to their previous research in the area that they were appointed for this project.

In 2008/9 the practice worked with Ramboll on a study that contributed visitor strategies and urban design proposals for towns near the world-renowned Western Pentapolis.

These guidelines are currently under consideration by the Libyan authorities, with the Shahat Masterplan providing the realisation of their carefully considered recommendations before they are brought into Libyan planning law.